Found along Big Rock Creek in Llano, CA in 2017, two family photo albums survived the sand, sun and water in the Mojave desert. Now part of the Waste Wunderkammer, the snapshots, polaroids and ephemera are revealed within the context of little known history of the nearby Llano del Rio utopian experiment. The project is part of MaidenLA 2020.

Selections from the Waste Wunderkammer – Station Eleven Edition – a project for the NEA’s Big Read Morongo Basin 2019 is inspired by Emily St. John Mandel’s book. The collection of curiosities found in the desert parallel’s Station Eleven’s Museum of Civilization, a display of extinct technology housed in the gift shop of Concourse C.  The Mojave version features research into the provenance of each item found languishing in our fragile arid eco-system.

Explore the Story Map
Selections from the Waste Wunderkammer

Collected since 2013 across the Mojave from Antelope Acres to Piñon Hills, the exhibit includes dirt, dust and research into the provenance of these sometimes rare, sometimes sublime, storied objects along with documentation of their discovery and of course a map. Opening Saturday, August 25th, 2018 from 4-7 PM at the Antelope Valley Conservancy in Quartz Hill, this event is part of Maiden L.A. 2018.

Catalog
Eco-Scenography at the Wallis

Revisiting my scenographic roots, For Nurture documents the collection of over 300 pounds of furniture pieces gathered from illegal dumpsites in the desert and repurposed as part of my stage design for Edward Albee’s At Home at the Zoo at the Wallis Annenberg Center for the Performing Arts in Beverly Hills, CA.

Between 65 to 136 million years old, the “Great Stone”, a seven story quartz monzonite rock, is said to be the world’s largest free-standing boulder. Manifesting Giant Rock reveals the local history, biographical information on key characters who lived nearby, events at the site, related publications and contemporary audio stories.

DEHSART >>trashed<< backward began in 2013, capturing, mapping and collecting illegally dumped trash to encourage a new view of waste as a resource through community engagement and collaborative on location assemblage interventions. The project was generously supported by multiple grants from the Antelope Valley Illegal Dumping Task Force. 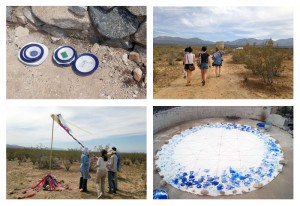 Squaring the Circle is an interdisciplinary arts exhibition on Saturday, May 3rd, 2014 featuring site-specific installations and performances to mark the 100th anniversary of the founding of the Llano del Rio Cooperative Colony, a utopian socialist community established in 1914 by Job Harriman in Southern California’s Antelope Valley. Like the original Llano community, the event participants reflect diversity in their work as historians, visual artists, filmmakers, writers, choreographers, dancers, musicians, activists, and interdisciplinary practitioners.

ComradeCore, images of Llano del Rio Colonists from Western Comrade, installed by Karyl Newman.
Dear Comrade
Written and directed by CalArts faculty member Mady Schutzman, “Dear Comrade” is an experimental essay film that documents the story of Llano del Rio (1914-18), the most important non-religious communitarian experiment in western American history. Llano is offered as a site to explore the struggles, courage, frustrations, fantasies, and Sisyphean efforts of innumerable idealists who have assumed comparable struggles in spite of tremendous odds. The story is told through archival footage, surreal re-enactments, interviews with ex-colonists, local residents and historians, and the meanderings of a silent nomad through the ruins of the Llano colony in the Mojave Desert. Through the intersection of stories, a seemingly traditional documentary morphs into a montage of parallel universes, political commentary, clownery, and a palpable desire—failings and disappointments notwithstanding—to give idealism and cooperation another try. Karyl Newman and Cindy Rehm will present their research on the colony and join the filmmaker in a question and answer segment following the screening.

The Next Step: Llano del Rio

Near the dairy barn ruins at the Llano del Rio socialist co-operative, Karyl Newman placed ALICE outside of the silo to honor the feminist architect’s little known designs for the colony.

The September 21st event references Alice Constance Austin’s 1935 book, The Next Step: How to Plan for Beauty, Comfort, and Peace with Great Savings Effected by the Reduction of Waste, created by Craftswoman House/Cindy Rehm and Hinterculture/Karyl Newman with Larissa Nickel to announce and provide context for a call for proposals for the Centennial Celebration in May 2014.

While enroute to the historic location in the Antelope Valley, visitors can listen to a podcast featuring interviews, sound art and site recordings available for download on soundcloud here.